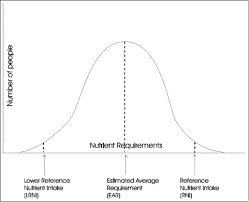 Dietary Reference values (DRV's) are in general terms used to cover all the figures produced by the Committee on Medical aspects of Food Policy (COMA).

EAR is the energy or nutrient is the amount which any stated group of people will on average need,

LRNI is enough for approximately 2.5% of the population. It is not enough for most people

RNI is the amount of a nutrient which is enough for at least 97.5% of the population

All DRV's are intended to apply to healthy people; they do not make any allowances for the different energy and nutrient needs imposed by some diseases.