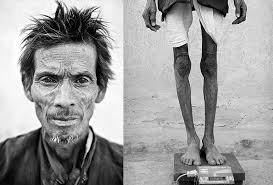 Daily undernourishment is a less visible from hunger, but it affects many more people, from the shanty towns of Jakorta in Indonesia and the Cambodia capital Phnom Peh to the Mountain villages in Bolivia and Nepal. In  these places, hunger is much more than on an empty stomach.

Victims live on significantly less than 2100 kilo-calories that is the average a person needs to live reasonably a 'healthy' life.

Hunger also weakens the immune system. Deprived of the right nutrition, hungry children are especially vulnerable to become weak to fight of disease and may die from common infections like measles and diarrhea. Almost 7 million children die before the age of 5 years old. Malnutrition is a key factor in over a third of these deaths.

Three quarter's of all hungry people live in rural areas. Mainly in villages of Asia and Africa. Overwhelmingly dependent on agriculture for their food, these populations have no alternative source of income or employment. As a result they're vulnerable to crisis.

cultural traditions and social structures often mean women are much more affected by hunger and poverty than men. A mother who is stunted or underweight due to inadequate diet often give birth to low birth weight children.

Around 50% of pregnant women in developing countries are iron deficient. Lack of iron means 315,000 women die annually from hemorrhage at childbirth. As a result , and in particular expectant and nursing mothers, often need special or increased intake of food.

People living in poverty cannot afford nutritious food  for themselves and their families. This makes them weaker.

In developing countries farmers can not often afford seeds. They may have to cultivate crops without the bulbs and fertilizers they need. Others have no land, no tools, and no education. In short the poor are hungry and their hunger traps them in poverty.

Too many developing countries lack key agricultural infrastructure, such as enough roads, warehouses and irrigation. The results are high transport costs, lack of storage facilities and unreliable water supplies. All conspire to limit agricultural yields and access to food.

Floods, tropical storms and long periods of drought caused crop failures and heavy livestock losses in parts of Ethiopia, Samilia, and Kenya. In 2012 there was a similar situation in the Sahara regions of West Africa.